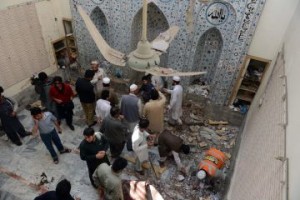 The blasts that happened shortly after Friday prayers was said to have injured over 50 people.

Both of the Sunni Muslim mosques were badly damaged, and the roof of one of them collapsed, said tribal police officer Badshah Rehman. The mosques were located in Baz Darrah village in the Malakand district of Khyber Pakhtunkhwa province.

The area has had a very heavy military presence since the Pakistan Swat Valley offensive in 2009, as rescue workers were seen trying to retrieve the dead and wounded from the debris. 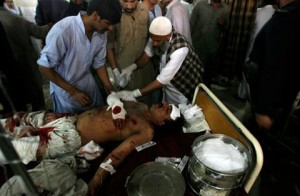 No one has claimed responsibility for the blasts, but the Pakistani Taliban tops the list of suspected perpetrators.

The Taliban have waged similar attacks in the past coupled with a bloody insurgency against the government for years that has killed thousands of civilians and security personnel.

The Pakistani army has mounted multiple operations against the fighters in the northwest, but they have proven resilient and continue to carry out near-daily attacks.