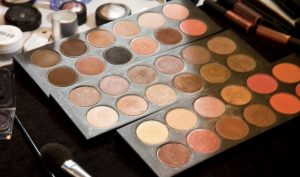 A waitress has claimed that she contracted herpes from a MAC lipstick endorsed by Rihanna at one of the singer’s concerts. Starkeema Greenidge, 28, developed mouth sores after a MAC Cosmetics representative applied the ‘RiRi Woo’ lipstick on her at a pop-up counter as she attended a show in Brooklyn, New York..

According to Greenidge, when she asked if the lipstick tester was clean, the woman replied, “Yeah, yeah, yeah.” The representative then applied the red lipstick to Greenidge’s upper lip and instructed her to “press her lips together and spread the lipstick around.”

Two days later, Greenidge developed a cold sore on her lip and her doctor diagnosed it as herpes.

She is now suing MAC, which launched Rihanna’s lipstick in May, after she suffered emotional distress and a loss of earnings from the ordeal, since she was unable to work for two weeks.

How Dangerous Are Makeup Counters?

You see a color of lipstick or eye shadow at a store, and naturally you want to try it on before you buy it, right?

Testers are used every day by potentially thousands of people. Some of these people can have dirty hands, or health problems such as pink eye and contaminate the testers with bacteria, viruses, fungi, or other potentially-dangerous contaminates.

In fact, experts say that more than half of all testers were contaminated – bacteria including staph, strep and E. coli bacteria from feces, as well as the virus that causes herpes, have been found on test samples. This means that you can potentially contract infections including pink eye, herpes, even hepatitis.

So, how can you safely try on that great new shade?

Make sure the tester has been properly prepped. For lipstick, he or she should dip it in alcohol, then scrape off the top layer, and use a new, disposable applicator, or a brush sprayed with alcohol. Since all of the contamination is on the surface layer, sharpening works for lip- or eyeliners.

Don’t test makeup in pots. Don’t try anything that comes in an open jar, since people dip dip their fingers into it, meaning there is no way to properly sanitize it.

Choose your hands over your eyes. Unless you know you’re getting a clean sample, avoid applying testers to your eyes or lips, which are direct entry points for germs and can lead to infections and viruses. When in doubt, if you simply must apply a product, apply it to the back of your hand.

Mascaras and liquid eyeliners have the most risk of contamination and should never be applied directly to the eyes or lashes. Not even if the counter has disposable wands. Why? Because you just can’t be certain that no one double-dipped. The best solution in this situation is to either use your arm to test the product, or sidestep testing and buy the product – and return it later if you don’t like it.

Powder products (such as loose or pressed eyeshadows, blushes and powders) have, on the other hand, the least risk of contamination. That’s because bacteria need a moist environment to thrive. However, that doesn’t mean that they are completely risk-free. It is always a good idea to ask the sales associate to wipe away the top layer of a powder product with a tissue before trying it on. Or try it on your hand, which is always the safer option.

Most people sweep lipstick testers on their lips without thinking, which is something you should never do. Again, if you must test a lipstick on your lips, make sure the sales associate sanitizes it thoroughly.

Unlike other cosmetic products, concealer and foundation should be tried on the face to guarantee a perfect match. If the testers come in a tube, squeeze a bit of product on a tissue and then throw it away. Why? Bacteria are usually found in the top layer of a product so once that is removed, it should be safe. If the tester comes in a cream or stick form, treat it like a lipstick and ensure the sales associate follows the same safety procedures.

Whenever possible, use a clean, disposable sponge instead than your fingers to apply the product on your face.

Pencil eyeliners should never be tried on the eyes. Test them on the back of your hands instead.