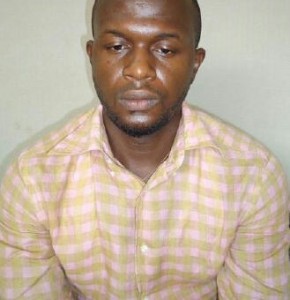 NDLEA Airport Commander, Hamza Umar, said tension was high when one of the suspects, Onedigbo Chibueze Emmanuel, 28, apprehended during the screening on a Qatar Airline flight going to Pakistan,could not expel one wrap of cocaine.

“While Akwaeze Anthony successfully expelled all 67 wraps of cocaine he ingested without assistance, the case of Onedigbo Chibueze Emmanuel, who inserted four wraps of cocaine in his anus, was different,” he said

“He was unable to expel one of the wraps until medical doctors came to his rescue.
“We were disturbed because his life was in danger.”

Preliminary investigation revealed that Onedigbo Chibueze Emmanuel is an unrepentant drug trafficker who was recently deported from Thailand after serving a three-year jail term over drug related offences.

According to Onedigbo who hails from Okija in Anambra State: “It is true that I was deported in February 2013 after serving three years jail term in Thailand.

“I went back into drug smuggling because there was nothing for me to sustain myself.

“My desire was to get some money from the drug deal and establish a business that can help me prepare for my future. “I feel so sad that it turned out this way.”

In his confessional statement, Akwaeze Anthony Obinna said that he was enticed by an offer of N1 million.

He said: “I am a trader at Ahiaohuru Market, Aba where I sell textiles.

“My business has suffered huge losses and I wanted to use the N1 million they promised to pay me in strengthening my business.

“I never thought of arrest because my mind was focussed on how to revive my business. It is hardship that led me into drug trafficking.I am from a poor family.

“Things are bad that I had to abandon my Guidance and Counselling studies at 200 level at Abia State University.”

The suspect who hails from Umunya, Anambra State, said he is a 2001 graduate of Giant Steps International Secondary School, Ogbor Hill, Aba in Abia State.

The Chairman/Chief Exercutive of the NDLEA, Ahmadu Giade, described the suspects’ action as sad.

“It is very sad that a drug convict is involved in drug trafficking few months after his release and deportation.

“This shows that he is not remorsefu “I urge members of the public to resist any temptation to smuggle drugs. You do not need to be involved in crime to be successful.

“It will tarnish your good name and lead to frustration.”

The suspects will soon be charged to court.