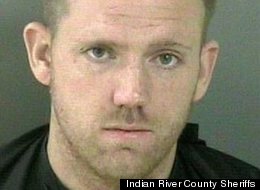 A man accused of robbing his neighbor might have gotten away with stealing firearms, a computer, a sword, drafting equipment and a large quantity of loose change — if only the coins hadn’t led the cops to his house.

Michael Sherman, 25, of Vero Beach, Fla., was arrested Wednesday after investigators from the Indian RIver County Sheriff’s Office showed up at the crime scene and noticed at least 40 coins similar to those reported missing leading straight to his home.

After they got a search warrant, deputies returned to Sherman’s home and found other items the victim claimed were missing, WPBF.com reported.

The officers came back with a search warrant, but the home was unoccupied. While there, the deputies located a unique set of drafting pencils and some ammunition belonging to the victim, according to a release by the Sheriff’s Office.

Sherman arrived during the search and led investigators to additional stolen property, including more ammunition and a computer buried in his back yard.

Sherman was arrested and charged with armed burglary because of the firearms stolen from the house.

He allegedly confessed to the crime and said he sold the guns to purchase the prescription pain medication Dilaudid, WPTV reported.

Sherman isn’t the first thief to leave a trail behind.