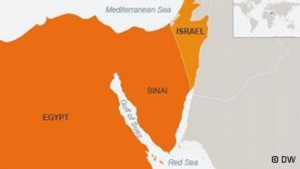 Egypt has sent army reinforcements into the Sinai Peninsula after President Mohamed Morsi said there would be no talks with fighters who abducted seven members of the security forces last week.

An army official said on Monday that the decision followed a meeting between the military leadership and Morsi, who has said he will not submit to blackmail by the kidnappers, who are demanding the release of fellow fighters jailed over attacks in 2011.

At least five military helicopters have been deployed to el-Arish, the largest city in North Sinai, where fighters kidnapped the troops, since last night after sending dozens of armoured vehicles and personnel carriers across the Suez Canal into North Sinai early on Monday.

Following the abduction, unknown assailants also attacked a police base on Monday, opening fire on the riot police facility in Al-Ahrash from a truck, security officials said, making pertinent the need to take decisive action against the fighters.

The kidnapping of Egyptian troops has highlighted the lawlessness in the peninsula and enraged security forces, who have blocked border crossings into Israel and the Gaza Strip to pressure the government into helping free their colleagues.

Presidential spokesman Omar Amer said: “All options are on the table to free the kidnapped soldiers.”

The state-run Al-Ahram newspaper said on its website that shipping in the Suez Canal had been briefly halted as the reinforcements crossed the waterway.

“Our patience has run out,” Al-Ahram quoted a military official as saying.

Morsi has met with the the Grand Sheikh of al-Azhar, Ahmed al-Tayeb and, and the Grand Mufti of Egypt, Shawky Ibrahim Allam, to discuss developments in Sinai on Monday.

The president’s office vowed in a statement late on Sunday.that authorities would secure the release of those held captive swiftly and safely and in a manner that will maintain the state’s prestige.

Morsi also said there would be no talks with “the criminals”.