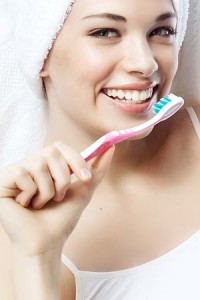 Are you hurting instead of helping your teeth when you brush? We pinpoint common brushing mistakes—and how to protect your pearly whites.

It’s not exactly a newsflash that one of the most important reasons to brush your teeth is to fight off cavities (not to mention prevent bad breath). But what if the way you brush your teeth actually makes you more susceptible to cavities, tooth decay and gum disease? Scary.

Turns out, there are a host of common mistakes that many of us make morning and night that can damage teeth and turn a healthy smile upside-down. Find out what you’re doing wrong—and how to break these bad habits for better teeth.

You don’t brush for long enough.

Most people don’t spend nearly enough time brushing their teeth, notes prosthodontist Michael Lenchner. Most dentists recommend brushing for two or three minutes, but few people ever make it to that. Next time, check your watch see how long your routine takes. Chances are, whether you’re rushing to get to work or ready to collapse into bed, you’re only brushing for a minute or so. To go the distance, bring an egg timer into the bathroom and set it for two or three minutes before you get started, or use an electric toothbrush (like Sonicare) with a two-minute timer.

You’re not watching what you’re doing.

Make a point to look in the mirror while you brush your teeth and see where the brush is actually going. It’s easy to miss the area right at the gum line, which is the most important part. That’s where plaque, tartar and bacteria can build up, which cause the gums to become inflamed and infected (aka gingivitis). Also keep a close eye on the back molars. If the brush head hits your cheek before you get to them you could miss them completely. Bonus: Paying better attention to your chompers will increase the likelihood that you’ll notice if something is awry, like chips, cracks or “bruxisms,” which are cupped out or overly shiny areas where your upper and lower teeth might be wearing into one another. Wearing away can also be a sign of TMJ problems, clenching or sleep apnea. Mention any unusual observations at your next dentist appointment.

Your technique needs a major makeover.

Enamel is made of tightly packed, glass-like rods that extend out toward the surface of the tooth. When you brush side-to-side, these brittle rods can break, leading to cracks and weakening teeth. Dr. Lenchner likens it to sawing down a tree. Remember: Teeth are not trees. Hold the brush so the bristles are at a 45-degree angle to the surface of the teeth and brush in small circles. Focus on a few teeth at once, then move on to the next set, continuing around from one side to the other, top and bottom, front and back. It’s okay to brush in straight lines on the chewing surfaces. After completing your circles, brush away from the gum line to clear off loosened plaque and bacteria.

The chances of enamel breakage are greater when you brush too hard. And if you have a tendency to clench or grind, the stakes get even higher. Those habits combined with hard sideways brushing can cause notches near the gum line called abfraction lesions. With continued pressure, they can deepen into the tooth’s inner dentin and cementum layers. What’s more, aggressive brushing can be traumatic for sensitive gums, causing irritation and recession.

Be sure to buy soft or ultrasoft brushes to minimize damage. Lenchner warns, though, that even soft bristled toothbrushes can cause abrasions if used incorrectly. He recommends Oral B or Sonicare soft brushes. “All of the electric toothbrushes are great tools if they help you brush longer and get you to the right places,” he says. If you’re willing to invest—to the tune of nearly $189—he is a big proponent of the newly released Emmi-Dent, which looks like an electric brush, but uses ultrasound pulses to kill bacteria without any brushing at all.

If you have a Water Pik, keep it on the lowest setting, even if it doesn’t feel like it’s doing much. Anything higher can erode your gum line. If your dentist gives you a special brush for cleaning implants or crowns, only use it as directed so you don’t disrupt proper gum growth.

As horrifying as it may sound, your toothbrush can be a veritable haven for germs, including strep and staph. You should replace a regular toothbrush every three months—sooner if the bristles look worn, frayed and bent. Over time, the bristles get damaged, like split ends in your hair, and bacteria nestle in those tiny tears. To minimize germs’ day-to-day growth, rinse your brush with hot water after use and allow it to dry completely.

You have the wrong toothpaste.

Baking soda toothpastes are good at getting stains out because they are abrasive—but that also means they’re hard on enamel. It’s a trade-off that might not be worth it. As for whitening toothpastes, Lenchner says that to his knowledge they don’t hurt your teeth.

Flossing gets between your teeth where toothbrushes can’t reach. Cavities form most often on the surfaces where two teeth touch. Bacteria get stuck there, feed off the sugars from food particles, colonize and produce chemicals that eat away at enamel and can work into the soft layer of dentin underneath. This can eventually lead to tooth decay. In other words, as odious as it may be, flossing isn’t optional—and it’s the best way to keep these cavity-creating colonies at bay.

Start with a full foot of floss, twirling the ends around the middle finger on each hand. Use your thumb and forefinger to gently work the floss between two teeth, being careful not to pull it roughly or saw it back and forth, both of which can injure the gum. Wrap the floss around one tooth and wipe up and down to loosen and remove plaque. Then do the same on the next tooth and repeat.

Once you’ve got the correct flossing technique down, you don’t have to do it standing at the sink, notes Lenchner. You might try flossing in front of the TV to make it feel like less of a chore.