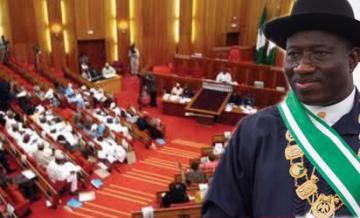 The Senate has fixed May 21 for discussions on the state of emergency declared by President Goodluck Jonathan in Borno, Yobe and Adamawa.

The Senate President, Sen. David Mark, announced this on Thursday when he requested the senators at plenary session and those absent to be present on the day.

Mark said their presence was imperative for the senate to form a quorum to deliberate on “an important national issue”.

“I would like to appeal to all distinguished colleagues here present and those who are not here, that they should be present on Tuesday, May 21, 2013.”

He said this was necessary “so that we form quorum to deliberate on a sensitive matter that will be before us on that day”.

Out of the 109 senators, 54 attended Thursday’s session.

Section 305 of the 1999 Constitution provides that the proclamation of a state of emergency has no effect unless the National Assembly passes a resolution, supported by two third majority of each house.

It adds that the proclamation is to take place within two days when the National Assembly is in session and 10 days when not in session, after the publication in the Official Gazette of the Federal Government.

“A Proclamation issued by the President under this section shall cease to have effect if it affects the Federation or any part thereof and within two days when the National Assembly is in session.”

The Leader of the senate, Sen. Victor Ndoma-Egba, said the delay in the debate could not breach the constitution since the proclamation had not been published in the government gazette.

“The constitution is very clear. You start counting the days from the date of the publication of the gazette. We haven’t seen any gazette.

“It is when the gazette has been published, if we are in session, we are obliged to approve or confirm it within two days.

“If we are not in session, then we are obliged to approve or reject it within 10 days. Section 305 does not provide a timeframe for the publication of the gazette.

“There is a lacuna here, but so far no provision of the constitution has been breached and there is no constitutional crisis”, he said.