Commissioner of Police in Nasarawa State – Abayomi Akeremale, has disclosed how two policemen allegedly leaked operational details of security personnel on a mission to Alakyo village to arrest the leader of Eggon militia group – Ombatse, were arrested.

Parading the suspects in Government House, Lafia, around 4:30pm on Friday, Akeremale said one of the policemen simply identified as Corporal Enugu, was arrested after a crack team of detectives monitored his behavior since the day of the ill-fated operation.

He said Corporal Enugu who drove one of the patrol vans with registration number NPF 6997 C, was one of the men who returned alive from the operation.

“A team of detectives monitored him carefully. They first stumbled on charms in his vehicle (official vehicle). Then, they followed up and stormed in on him at his residence. But before our men got there, the information had already reached there. But my men were fast to get him, and a second policeman in his house,” the police commissioner said. 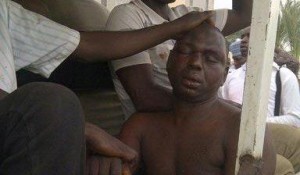 Three AK47 rifles and a sack of charms were paraded alongside Corporal Enugu and his accomplice, Corporal Haruna Joseph.

Akeremale also showed Governor Umaru Tanko Al-Makura the front of a police van driven by Corporal Enugu which had a red sticker with an image of a machine gun and a chain of bullets, by the registration number, saying: “our investigation has shown that this sticker was put so that his members can notice, separate and spare him.

“This is just the beginning. It is like the beginning of a river, which is usually small; it will lead us to track down all members of the sect.”