45-year-old Augustine Odogwu, an indigene of Delta State has been arrested by operatives of the National Drug Law Enforcement Agency, NDLEA, for being in possession of 108 kilogrammes of weeds suspected to be Cannabis Savita(Indian Hemp).

Luck ran out for Odogwu when he was caught at a military check point near Gadar Maiwa village in Ningi Local Government Area of Bauchi State. The suspect, it was learnt, disguised himself in police uniform as a Superintendent of Police with a conspicuously displayed a police I.D card No 10084.

The suspect, clad in his fake Superintendent of Police uniform,was arrested after his car, loaded with 108 kilograms sacks of leaves suspected to be Indian hemp, was stopped at a checkpoint, a security source said.

“After the man was arrested the first preliminary investigation revealed that he was not a policeman and he was handed over to the Nigeria Drugs Law Enforcement Agency NDLEA , Bauchi State Command, for further interrogation,” the source said.

NDLEA Commandant, Parah Julius Bawa who confirmed the arrest to newsmen at the Command’s headquarters said Odogwu and two other suspects who are at large concealed the marijuana inside the booth of a brown Toyota Avalon Saloon car with Lagos registration number MUS 937 BB driven by the suspect. 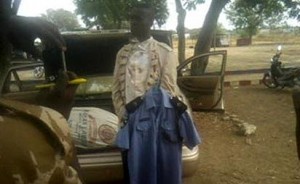 “The fake police superintendent used the police uniform to beat security checkpoints from Abbi in Delta State to Bauchi State, where he was not lucky to escape. The Command’s investigation revealed that the Delta-born Odogwu who resides in Ondo State where he operates his illegal business was dismissed from the police in 1993 and had been trafficking in Cannabis Savita for more than four years. He was previously arrested about two years ago for a similar offence, but was later released,”
the NDLEA boss said.

Bawa said the Command also seized 194.23 kilogramme of the illegal drug between January and March. The drug, he said, was recovered from 56 suspects and from among them is a notorious drug dealer called Turaki Mohammed of Misau Local Government Area of Bauchi State.

The suspect, Augustine, in confession said that he was a Police Sergeant for six years before he was dismissed in 1992.

“I have been earning a living from this illegal drug business for over four years. Although I reside in Ondo State, I have supplied more than five states with Indian Hemp. It was when I tried coming to Bauchi to supply them with the drug that I was unlucky and got caught. I really regret my actions because of the shame it has brought on me and my family. It is true that I was dismissed from the Police, but I got the Superintendent uniform through a friend who has a serving Supo friend in the Police,” Augustine said.

The suspect apologised for his actions, saying that it was hardship that led him into the act.