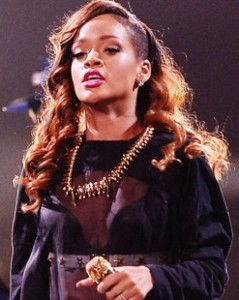 If you’d paid top dollar for a Rihanna gig, waited another two months for it to be rescheduled because the star had laryngitis, and then had to stand around for a whopping three hours until she came on stage, with no support act to keep you entertained, you might be a bit Ri-Ripped off.

The Boston date of her Diamonds tour was originally cancelled due to the singer’s bout of laryngitis, but she returned on Monday May 6 to play at the TD Garden venue.

What was she doing for 180 minutes? There was speculation that Ri-Ri was watching a basketball game (she’s apparently a big fan) as the Chicago Bulls were taking  on Miami Heat in the opening contest of the NBA Eastern Conference semi-finals.

In a video clip uploaded to YouTube countless fans can be heard booing an empty stage while they wait for the singer to turn up and perform.
But Rihanna seemed unfazed by the audience’s reaction, posting to Twiiter after the show: “Boston I will never forget this night!!! I truly have deeper love for you now!!!”
I guess she is finding it hard to deal with the break-up of her relationship, after Chris Brown seemed to confirm that the couple had split up because he needs “to be the best Chris Brown he can be”.