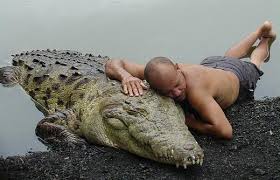 A far north Queensland fisherman has spent the night with a two-metre saltwater crocodile in his bedroom.

Ashley Sala caught the reptile at Ninds Creek on Tuesday night while out barramundi fishing near Innisfail, south of Cairns.

Fed up with the prevalence of crocs in the area, Mr Sala bundled the animal into his car boot and took it to the home of his local councillor to complain.

Cassowary Coast councillor Mark Nolan says it was one of the more unusual house calls he has received.

“I did calm him down and asked him to comfort the reptile for the night, secure it – he actually asked his girlfriend to leave the small donga for the night,” Councillor Nolan said.

“He had its jaws tethered but it was free to roam around.”

“Paul Hogan never slept with a saltie – Ashley has – and I witnessed it,” he said.

“I give Ashley a 10 out of 10 for the way he cared for the reptile during the night and now it’s been relocated and it’s safely back in a crocodile farm.”

Queensland Parks and Wildlife workers took the croc from the donga to a crocodile farm.