In the second match of the Roland Garros at the Court Philippe Chartrier on Sunday, second- seed Roger Federer strolled to a 6-2, 6-2, 6-3 victory against world no 166 Pablo Carreno- Busta, who after getting through the qualifiers found himself up against the Swiss. 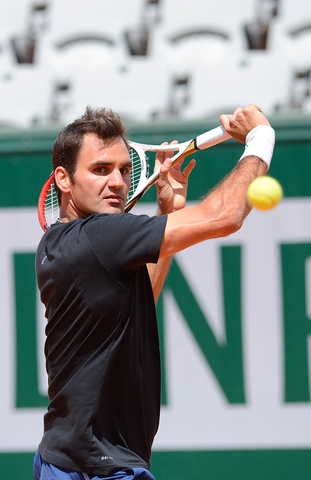 Within ten minutes Carreno- Busta was two breaks down which signaled the beginning of his baptism of fire. Federer raced into a 4-0 lead, a sizzling crosscourt backhand gave the Swiss a 5-0 lead and the 21- year- old Spaniard looked vaguely dazed at the changeover.

Carreno- Busta broke Federer once, in the next game. But the Swiss served out the set from there as he began his bid for a second French open title with victory in one hour and 20 minutes.

The 21- year- old qualifier went into the match on the back of seven titles this year on the satellite ITF Tour, five of them on clay. He has experienced just one defeat in 39 matches on the ITF Futures circuit; however, his only reward for getting through the qualifying tournament was to come up against a Swiss brick wall.

“I felt good,” acknowledged Federer. “He’s played many matches and won a lot this year- a lot on clay by comparison with me. I knew it could be tricky if I didn’t sustain a certain aggressiveness, get caught up in long rallies, maybe what he’s looking for.

“I did well on the serve, on the return, on movement. Clearly I’m very pleased. Am I a favourite to win here? I don’t care, because it doesn’t give me any more opportunities to win the tournament. I just want to remain calm and let the storm go by.”