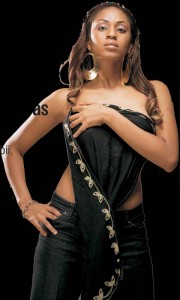 This might not be the best of time for former beauty queen and rapper, Munachi Abi, a.k.a, Muna, as she’s is presently battling to save her name from being dragged to the mud as an impostor is using it to dupe unsuspecting fans.

According to her, the said impersonator is a Lagos based damsel whom she described as a “bleaching Brazilian hair she-males.”

WG gathered that the said impostor wears Muna’s favourite coloured-hair which makes her look so much like the singer. She goes about town, pretending to be Muna  and in the process extorting money from the unsuspecting fans.

Muna took to Twitter account during the week to  cry out against the ugly development. “I shall collect all that has been stolen from me. ALL!!! Biko(please) bleaching Brazzillian hair she-males don’t come and be reaping where you did not sow. But you gotta(must admit) admit I must be a big deal for you to go about duping people pretending to be me..”, she tweeted.