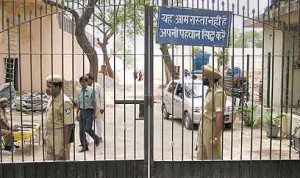 S*xual harassment seems to be nowhere near its end in India as it has now gotten to the prisons, with the latest incidence raising concerns over the safety of women inside jails.

A prisoner awaiting trial was molested inside a prison in Bihar. The woman is currently in the Sheikhpura district jail in connection with the murder of her husband.

The incident would have remained a mystery had she not been brought to the court in connection with the case earlier this week. During her appearance in court before chief judicial magistrate Avadhesh Kumar Dube, she narrated the entire incident to the court sobbing inconsolably. The court immediately ordered the police to investigate her allegations.

During the inquiry, her charges were found to be true after which a case was finally registered against a policeman deployed on jail security on Friday.

According to the victim, she was washing her face in her jail ward last month when the accused cop Devendra Ram gagged her and molested her. She was allegedly tied up with chains on in her feet for two days after she protested the crime and threatened to tell the court.

“We have recorded her statement of the victim and registered a case against the accused cop on the basis of her statement,” the local Sheikhpura district superintendent of police Meenu Kumari said.

The victim has been in jail for the last four months.