Five days after a building belonging to Foursquare Gospel Church collapsed in Bashiru Street, Ojodu, Lagos, another building beside it was engulfed by fire on Sunday morning. 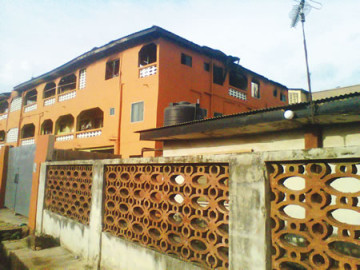 The three-storey building with no fewer than 30 flats went up in flames around 8am.

No fewer than four persons were seriously injured while property, which cost could not be estimated as of the time of PUNCH Metro’s visit, were reduced to rubble.

Before the men of the Lagos State Fire Service would come to the rescue of the occupants, eight flats had already been burnt.

The intervention of the firefighters prevented the fire from spreading to other flats and buildings.

The cause of the inferno could not be immediately ascertained but an occupant of the building, who craved anonymity, said it was caused by a dysfunctional generator that caught fire in one of the flats.

Following the inferno, Lagos State Government has given the occupants seven-day notice to quit the building in 12/13 Bashiru Street, Berger.

The directive was issued by the state’s Building Control Agency.

When PUNCH Metro spoke to some of the occupants, they said they would not move out of the building since their apartments were not affected.

“It is nonsensical to give everybody quit notice. Not every apartment is affected. I think eight flats or so were affected. The building has close to 30 flats – including self-contained apartments,” an occupant, who did not want his name mentioned, said.

Just as some of the occupants were bemoaning the plight that befell them, those who claimed to have been duped when tenants were being sought for the building about five months ago, were also there.

It was learnt that after the issue of the tenants were resolved, those who were lucky moved into the building in late February 2013.

One of the affected persons, who identified herself only as Tina, said the developers of the house used it to defraud prospective tenants of more than N80m.

Tina, who said the property owner had been dragged to court by more than 200 duped tenants, added that the day her family was to move into the place, more than 10 persons laid claim to her two-bedroom apartment.

Tina said, “It was a big shame we had to go back to where we had left. When we got to our new apartment, 10 persons were laying claim to the flat. Before we could call Jack, one of the intending tenants had arranged for miscreants. They came and drove all of us away.

“That was how we lost our apartment. As I speak to you, more than N400,000 we paid is still hanging. Each time I pass through the place, I always shed tears. God will judge them.”

Another victim of the scam, who preferred to be anonymous, said, “This is a house for which I was duped of more than N1m. The property will never get peace.”

Spokesman for National Emergency Management Authority, Ibrahim Farinloye, said the fire incident began in the morning of Sunday, adding that the quick intervention of emergency workers including firefighters, prevented the escalation of the incident.

Farinloye said, “The building was engulfed by fire this morning. The building has about 30 flats. But eight flats at the top floor were affected.

“Also, some persons were injured and property destroyed.”