Roberto Mancini has been ‘relieved of his duties’ at the Etihad Stadium a year to the day he guided the club to its first Premier League title in 35 years.

The Italian coach took Manchester City to victory in the 2011 FA Cup and a dramatic 2011/12 Premier League title in his three- and- a- half year stay at the Manchester club. 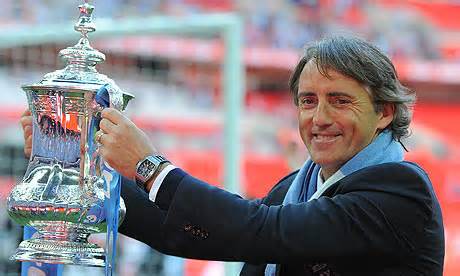 Mancini had been aware of the insecurity surrounding his job at the Etihad stadium prior to the FA Cup final with Malaga coach Manuel Pellegrini considered a possible replacement, after meetings between director of football Txiki Begiristan and the Chilean’s agent Jesus Martinez.

Mancini learned on Monday night he had been relieved of his duties after failing to achieve any of the club’s ‘stated targets’ for the season.

Brian Kidd is the man set to take charge of the final two games of the season, matches away to Reading on Tuesday and at home to Norwich on the final day of the 2012/13 season.

The club statement read: “It is with regret that Manchester City Football Club announces that Roberto Mancini has been relieved of his duties as Manchester City manager.

“This has been a difficult decision for the owner, chairman and board to make and it is the outcome of a planned end- of- season review process that has been brought forward in light of recent speculation and out of respect for Roberto and his extensive contributions to the football club.

“Despite everyone’s best efforts, the club has failed to achieve any of its stated targets this year, with the exception of qualification for next season’s UEFA Champions League.

“This combined with an identified need to develop a holistic approach to all aspects of football at the club, has meant that the decision has been taken to find a new manager for the 2013/14 season and beyond.”

In his three- and- a- half year reign at the Etihad, the Italian oversaw 191 games, won 113, drew 38 and lost 40, with a win percentage of 59.2 per cent. His overall statistics had club chairman Khaldoon Al Mubarak; personally, tender his genuine votes of thanks to the former Inter Milan manager.

“Roberto’s record speaks for itself and he has the respect and gratitude of Sheikh Mansour, myself and the board for all of his hard work and commitment over the last three and a half years.

“He has clearly also secured the love and respect of our fans. He has done as he promised and delivered silverware and success, breaking the club’s 35- year trophy drought and securing the title of 2012.

“I would like to personally and publicly thank him for his dedication to the progress that he has overseen and for his support and continued friendship,” Mubarak added.