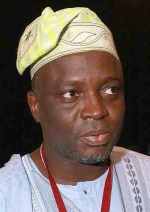 He replaces Late Lateef Adegbite who died in 2012.

The appointment was ratified during the council’s National Executive Council meeting in Kaduna yesterday.

Prior to his appointment, Oloyede was Vice Chancellor of University of Ilorin in 2007 for a single term of five years.

Currently, Oloyede is the Executive Secretary of National Inter-Religious Council (NIREC) and also the President of Association of African Universities (AAU).

He has authored and co-authored several articles in reputable local and international outlets.