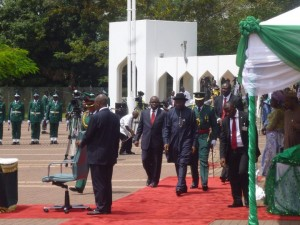 The Federal Government has again cancelled normal activities lined up for this year’s May 29th Democracy Day celebration which usually holds at the Eagle square, Abuja, owing to security concerns; this will make it the second time in a row the event has been shelved.

According to a Presidency source weekend, a mini-parade to mark 14 years of uninterrupted democratic rule in the country would be staged at the Presidential Villa, Aso-Rock and attendance would be strictly by invitation.

Evidence that the usual line-up of activities would take place within the heavily fortified Aso Rock could be seen at the Eagle Square – venue of such events in the past, as it remained desolate and was not wearing a new look of touch

The source disclosed that the cancellation was done at the federal level for some reasons related to national interest while state governments were at liberty to either hold or cancel the celebrations in their respective states.

According to him, “ I can confirm to you that the usual activities to mark the Democracy Day have been cancelled because of the poor security situation in the country, no foreign Head of Government will want to come to Nigeria now for such a celebration, we have to take internal measures to avoid embarrassment; we still have many celebrations ahead”.

Meanwhile, the Federal Government had already declared the day as a public holiday.