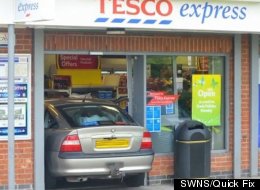 Former driving instructor Terry Buckle has been mayor of the British town of St Edmundsbury for less than a week, but he’s started off his term with a big bang — right into his local grocery store.

Buckle, 73, crashed his car through the doors of a Tesco Express store yesterday after the auto lurched forward from a disabled parking spot directly in front of the shop while he was still behind the wheel, the East Anglian Daily Times reported.

Buckle suffered whiplash and shoulder injuries in the bizarre accident and was taken to a local hospital, but his pride was what was damaged most. He was a bus driving instructor before being elected mayor and the crash marked his first accident in 56 years.

“I know people might think it is a bit of a joke that I have become mayor and the first thing I have done is wreck my car but I cannot see the funny side of it,” he said, according to the Mirror. “The thought that the car could have hit someone left me really shaken up. I am just so thankful that nobody was in the doorway when the car went through.”

Fellow politicians like councilman Frank Warby are, in true political fashion, putting the best spin on the situation.

“He had a slight mishap. They are automatic doors so they opened as he approached,” Warby told the BBC.

Still, Buckle is so shaken up by the accident that he’s vowed to stop driving,MSNNow.com reported.