Ten years after the demise of humour merchant and master of oduology Gbenga Adeboye, his brother, Femi, shares the family’s experience in this interview 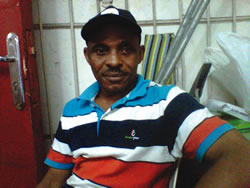 Ten years after Gbenga Adeboye’s death, how is the family taking it?

Because we so much believe in God in our family, we take everything as it comes. My father died in 2004 but my mother is still alive and she believes that nothing happens except God decrees it. At times she talks about my brother’s death but she attributes everything to God.

What of his immediate family?

The two wives are in Lagos; the children of the first wife are in the UK while the second wife is living with the three children she had for my brother in his house.

The younger brother, Kayode, who took after Gbenga too died. What do you think caused that?

Well, God knows what happened. I don’t really know; he was ill and we took him to the University College Hospital, Ibadan and he was tested. In fact, a lot of tests were conducted on him but there was nothing discovered to be wrong with him. We suspect it was a spiritual attack because the tests conducted on him did not show that anything was wrong with him physically.

Was he under the tutelage of Gbenga for him to have been so good just like him?

So what did you suspect might have caused the death of the two talented artistes in the family?

As someone that was very close to Gbenga, how would you describe him?

My brother was a good man; we spent a lot of time together even when our parents were not there. We lived in Modakeke before he came to Lagos. We remained so close until he died. When I was in school, he made it mandatory for me that I must come to Lagos every weekend because I would iron his clothes and drive him everywhere. We were very close but my brother lived a carefree life and if you asked me, that was his undoing. He loved everybody and he believed that everybody loved him. So, that was the mistake he made. It is not everybody that laughs with you or expresses open affection for you that loves you but my brother did not understand that. One has to be very careful in life but my brother lived a carefree life. So, if anyone wants to take a cue from there, don’t live a carefree life and don’t make the mistake that it is everybody you love that loves you back.

As someone that was very close to him, didn’t you try to caution him or was he someone that you could not talk to?

I used to talk to him freely; in fact there was nothing in the world that we could not discuss because we were very close. On different occasions, you would warn him not to do certain things or that he should be careful about something. But he would tell you that’s how he would do his own. There were so many instances which I cannot mention now. All I know is that he lived a very carefree life.

After his death, did all his numerous followers, especially his colleagues, did they stay with the family?

They tried their best. Yesterday, I was in Abeokuta with his manager to attend a lecture organised in his memory and Toba Opaleye by colleagues and I felt so impressed. For people to remember you 10 years after your death shows that those people value your memory and I felt very proud that my brother’s memory is still on.

What of his business, how has it been run?

This place which is a business centre is being managed by me and his general manager. You know this used to be his office while he was alive. What we do here is different from what he used to do. He was into music and productions but here is a business centre and a cyber cafe. Ironically, there was a time I recommended this business for my brother and he sent me to so many places to do the costing of all the equipment. When I came back with the estimate, I sat on his bed and as he was about to write the cheque, he said before doing that, he wanted to tell his wife. Unfortunately, after telling his wife, he came back and said it was no longer possible to go into the business. So, after his death, we went into bulk sales of recharge cards from money I got from friends and banks but some things happened that put paid to that. In fact, I had even forgotten about the initial plan of going into a business centre but one day, I just remembered and that is what we are doing here now. I incorporated a company in his name, Olugbemiga Adeboye Nigeria Limited, to keep his name alive.

Who is handling his productions and records?

The production stuff and his intellectual property are with his nuclear family, especially the second wife. I don’t want to get involved in that because of the peculiar nature of such business in Nigeria. What they get as returns from it is very insignificant and I don’t like something like that. There was a time I sponsored one of his colleagues, Yemi Ajide, to release her record in 2010, it was just last week that I got my money back. I read financial management and I can do financial interpolation and cost efficiency of investment. That is what I know but record production is not something I am interested in at all. So, the intellectual property of my brother is with his nuclear family and I believe they are in business.

As someone from a very strong Christian family, why did he marry two wives?

My father was a general overseer in the Apostolic Church. We are very strong Christian family. When my brother had cause to divorce his first wife, he had the right to marry another one and that’s what he did.

We learnt that the family objected to the marriage of your brother to his second wife, Lara.

No, there is no truth in that. In fact, I would say I was the closest to the wife and we never had any clash whatsoever until my brother died. We used to be very close like brother and sister. It was the document of my brother’s house that created the problem between me and his wife. The document is not with me. Immediately I took it, I handed it over to our uncle because my brother did not marry only one wife. That marked the beginning of the problem between us. When my brother was alive, his wife did not like to see me dull, she would ask me why. At times she would give me money if she realised I was broke. At times also, she would say she would not allow me to go unless I gave her money. That’s how we used to live until the house document issue came about.

What are you doing to make sure that the children of Gbenga Adeboye are not far away from the family?

The children of the first wife who are in the UK call us regularly but maybe because of the rancour that occurred after the death of my brother, I have not been seeing Lara’s children.

So nobody is into music again in the family now?

Seun is into music; I sing myself. It is something that runs in the family. Segun, the first born of my brother is into music in the UK.

Gbenga Adeboye used to be versatile in both Christian and Islamic history, how did he do it?

My brother was a researcher and when you do research into a field, you become a specialist in that field. My brother was a very good researcher. There was a time he gave me some money to buy any book on Yoruba for him and that day, I was able to buy about 40 books. The following week, he told me he had finished reading all the books with comprehensive notes on them. He dug into all religions and that was why he was versatile in all aspects.

His death must have really shocked the entire family.

Of course, it was a terrible one. For me, especially, I did not believe he could die in the next 40 years. Even if a prophet told me I would say it was a lie but maybe that’s how God wanted it. To the glory of God we have been coping and the little we have, we share and life goes on.