Girl Can’t Find a Date for Prom Takes Calculator Instead 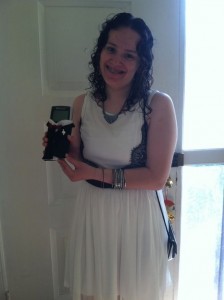 This is the story of a girl and her calculator. Instead of staying at home and missing the most memorable party of her high-school years, a girl who did’t get invited to prom decided to attend with her trusty calculator as partner, and posted some cool photos as proof.

“No one asked me to prom, so I took my calculator,” Tumblr user ishipitlikeups (I Ship It Like UPS – coolest id ever) wrote on her blog. Urged by other users to share some photos and prove herself, the girl added a series of pics of her holding her trusty TI-84 Plus Silver Edition graphic calculator all dressed-up and ready to party. He wore a hand-made silk tuxedo complete with a nice little bow tie and was the star of the show as his date introduced him to her friends and teachers.

They slow-danced, had a great time together and even managed to make the principal’s weekly email. He wrote: “Here is a quick classic story: A young girl showed up at the Prom alone. I greeted her and asked where her date was. She smiled and reached in to her purse and extracted a calculator she had decorated with a paper tuxedo. We had a good, laugh, only a student would bring a calculator to the Prom.”

The creative girl, named Regina Reynolds, only a junior in high-school,was surprised to see her story go viral so fast, but was quick to respond to online users’reactions on major social platforms like Twitter and Facebook. Although there was the occasional negative comment to her choice as partner, most people congratulated Regina for her original geeky idea and considered her an inspiration.