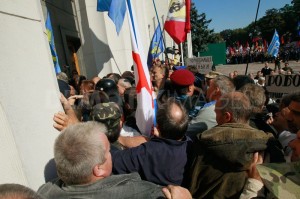 Supporters of the Ukrainian President Viktor Yanukovich clashed with the opposition, as both sides held thousands-strong rallies in the capital, Kiev, police and local media have said.

A dozen young men hurled stones and plastic water bottles at opposition supporters and were then pushed away by police in riot gear, television footage showed on Saturday.

Pictures showed anti-Yanukovich protesters fighting back, and at one point some of them tried to drag the crew from a military vehicle that carried messages mocking opposition leaders.

Police said several people had been injured in the fighting a block a way from a main opposition rally.

Vitali Klitschko, the Ukrainian world boxing champion and one of the leaders of Ukrainian opposition, led 15,000 protesters through the streets of Kiev on Saturday calling for an end to corruption and demanding the immediate release of jailed former prime minister Yulia Tymoshenko.

The European Court of Human Rights ruled in April that Tymoshenko’s August 2011 detention was unlawful.

The European Union has indicated that Tymoshenko’s continued imprisonment would make it impossible to sign landmark association and free trade deals with Ukraine tentatively planned for November.

Klitschko, whose UDAR party has joined Tymoshenko’s opposition group in parliament, said that Ukraine’s hopes of joining the European Union would remain a dream unless Tymoshenko was released.

“How can this happen if we still have political prisoners?” he said.