The Governor of Akwa Ibom State, Godswill Akpabio and his Abia State counterpart, Theodore Orji are yet to settle the rift caused by the refusal of the later to cooperate in the completion of the six lane Oron-Uyo-Ikot-Ekpene-Aba and four lane Ikot-Ekpene- Umuahia roads. 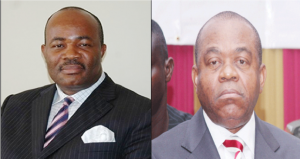 Governor Akpabio has indicated willingness to complete the entire stretch of the road from Oron to Aba and from Ikot-Ekpene to Umuahia on the condition that Governor Orji pays compensation to those whose buildings, huts and thatches are on the proposed construction lane from the Abia end of the road. Orji is expected to pay compensation to those to be affected by the displacement caused by the road extension from Ngwa to Aba, while Akwa Ibom settles those from Oron to Ikot Ekpene to give room for a six lane highway through to Aba.

In the same vein Akwa-Ibom state will settle its indigenes from Ikot-Ekpene to Obot-Akara while Abia completes its own end to Umuahia to pave way for a 4-lane express way.

Akwa Obom state government felt that opening these two roads will facilitate trade, commerce and distribution of goods and services between the two states and also aid travelers coming to Akwa Ibom from the North and West who mostly makes use of the old two lanes. Those from Abuja-Kano axis normally follow through Umuahia narrow stretch to Ikot-Ekpene while those from Lagos axis pass through Aba with its associated flooding, traffic snarls and street urchins.

This small stretch of distance always translates to hours on bad, narrow, winding roads hence the efforts of Akpabio Government to open up the key roads. However, Orji have refused to relocate those on the proposed road path citing lack of finances and lack of political will to enforce demolition of buildings with the anticipated public criticisms.

The governor by this recalcitrant posture is sacrificing the economic development of his people, and the increase in the volume of commerce, trade and businesses which these key roads will enhance on the altar of political expediency. The people of Abia state should be aware of this opportunity from a sister state and put reasonable pressure on the Governor to act reasonably.

Those whose huts, thatches and houses are blocking the overall development of the Enyimba city should be made to see reason to accept reasonable compensation.

Some Abia elders have previously put pressure on the governor to see reason to no avail while his Akwa-Ibom counterpart effort to convince the governor also failed. Sources close to Godswill Akpabio told groups of concerned Igbo clergymen in Abuja that the stalled Abia end of the road is due to the misunderstanding.

Julius Berger is currently constructing the Akwa -Ibom end of the roads at reasonable speed and the quality of the road is standard enough. Soon the construction of the Akwa-Ibom end of the road will be rounded up and Abia State will still look for money to construct the said roads in the future if the state will link up for a favorable commerce driven initiative with Akwa -Ibom and Cross River States and enhance the future use of the Calabar Ports. Abia citizens should prevail on their governor to act in the interest of posterity.

Share
Facebook
Twitter
WhatsApp
Previous articleError On JAMB Form Made Me Study Fashion Design –AY’s Brother, Yomi Casual
Next article(PHOTO) CAN President Oritsejafor On The Floor And In Tears After Receiving Award
- Advertisement -