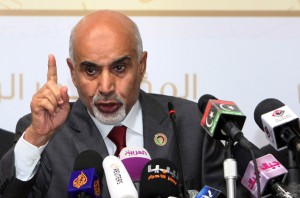 Armed protests in recent weeks for law banning officials who served under Gaddafi holding government jobs to be passed in congress in Libya has yielded fruits, as the president of the country’s top political body, Mohamed al-Megaryef, has resigned his post in compliance with the new law.

Megaryef, who heads Libya’s General National Congress, announced his decision on Tuesday, despite having played a part in toppling the now slain Libyan leader, saying that the law must apply to everyone.

Critics and diplomats fear the so-called “political isolation” law could strip government of experienced leaders, further complicating the transition to an orderly democracy.

“Everyone must obey the law out of respect for legality and democracy,” Megaryef said at a plenary session of the General National Congress.

“I tender my resignation… in conformity with the law.”

Megaryef was Libya’s ambassador to India in the 1980s under the regime of Gaddafi before he defected to become a leader of the exiled opposition for three decades, but his time with Gaddafi has tainted his record under the new law.

“I leave with my head held high and my conscious clear,” said Megaryef, who stressed he was the first of the Gaddafi-era officials to conform to the law, which was passed by the General National Congress on May 5.

The law was passed under pressure from armed men who had surrounded the foreign and justice ministries for several days to press the government to sack officials linked to Gaddafi.

A member of the national assembly said a new president of the General National Congress was due to be elected soon.

The political isolation law, which officially comes into force on June 5, bans officials who served under Gaddafi between September 1, 1969 and the fall of his regime in October 2011.

Several other members of the Congress and administration officials are expected to be affected.

He spent 31 years in exile, including 20 years as a political refugee in the United States after he founded an opposition group that had tried to overthrow Gaddafi.

During his exile he was hunted by Gaddafi’s intelligence services, who had launched a campaign in 1980 to liquidate opponents of the regime, but he survived.