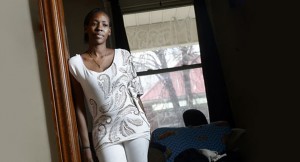 With a $338 million Powerball ticket having been sold in New Jersey — the fourth-largest jackpot in Powerball history — it’s a good time to remember that the sudden gains of a lottery windfall can be fleeting.

Imagine, for instance, winning $10 million and having almost none of it left less than a decade later.

It happened to Sharon Tirabassi, a 35 year-old resident of Hamilton, Ontario. Nine years ago, The Hamilton Spectator reports, Tirabassi cashed a check from the Ontario Lottery and Gaming Corp. for $10,569,00.10 (Canadian). Today, after spending almost all her winnings — “big house, fancy cars, designer clothes, lavish parties exotic trips, handouts to family, loans to friends” — she’s back in the working class: riding the bus, working part-time, living in a rented house.

What remains of her windfall is in trust for her six children; the money will become available when they turn 26.

“The moment I got it, I divided it among my family,” Tirabassi told The Spec: $1 million to her parents, and $1.75 million among her four siblings. She was generous with others, too, buying houses and renting them out at low rates, paying people’s rent, offering loans for bail and business ventures.

“All of that other stuff was fun in the beginning, now it’s like … back to life.”

That other stuff included vacations in Cancun, Florida, Las Vegas, California, and the Caribbean, as well as four cars: a Hummer, a Mustang, a Dodge Charger and a custom Cadillac Escalade.

Tirabassi was a single mother, recently off welfare and newly employed as a personal care provider, when she struck it rich on Easter Weekend in 2004. As a teenager, she had lived in shelters, and all that money didn’t come with instructions. Tirabassi didn’t hire a financial adviser; she didn’t even keep close track of her account balance. Suddenly, with just $750,000 left, Tirabassi woke up: “that was just time for fun to stop and to just go back to life.”

Tirabassi’s husband, Vinny, who brought three kids of his own to the marriage, shares her stoicism about the couple’s lost fortune. He says he lived simply his whole life and is used to not being rich. Recalling the post-winning entreaties of suddenly interested friends, some of whom came asking for favors and then disappeared, Vinny says, “Money doesn’t buy you happiness. It caused her a lot of headaches.” His wife had a hard time saying no to those she thought of as in need: “That’s the way I was brought up,” she says. “Help those who can’t help themselves.”

For the complete story of the couple’s financial descent, head over to The Spec.com, and check out the paper’s 2007 interview with Tirabassi, when she had already spent half of her winnings.

Tirabassi’s experience stands in contrast to that of Sandra Hayes, who pocketed around $6 million when she and a dozen coworkers split a $224 million Powerball jackpot in 2006. (Watch Hayes tell her story in the video below.)

Like Tirabassi, Hayes went on a spending spree — including a boat, an Escalade and a Mercedes — but she also paid off her mortgage and student loans, and was leery about handouts to friends and relatives. Today, Hayes lives comfortably but not extravagantly.

“I love a good deal, I’m on a budget, I save my money,” she says. “I try not to live above my means.” Her warning to the newly rich: “If you’re not disciplined, you’ll go broke. I don’t care how much money you have.”

Hayes sounds as though she might have taken lessons from Six Tips on How to Avoid Squandering a Financial Windfall. For more advice, check out these Powerball winners’ lessons on how to hang on to your cash, whether you’re a millionaire or just trying to make ends meet.