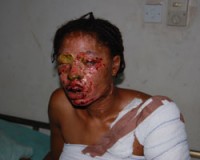 If Blessing Ikhumhi, a student of Edo State School of Health Technology thought that it is only in war situations that tragic tales are told by the victims, she would have known better now as she tells her ‘tragic’ love tale from her hospital bed where she has been a patient at the University of Benin Teaching Hospital (UBTH), Benin City for the last three months.

Blessing, 23, once thought that Okosun Cyril, the man she once loved, would never hurt a hair on her head but how wrong she was as he not only bathed her with acid, but has left her in danger of being blind.

Doctors in the hospital believe she may never see again except she is flown to a specialist hospital in India, where her sight could be restored.

Blessing’s ordeal began when she told her boyfriend – Cyril – who is now cooling his heels in police custody in Benin, that she was no longer interested in their ‘uninspiring relationship’ but little did she know that the decision did not go down well with him.

He visited her house and asked for a talk.

The victim had gone outside with the hope that her boyfriend wanted to iron out the grey areas and probably, convince her on the need to in the relationship, but to her shock, he bathed her with acid instead.

From that fateful day, she lost the use of her eyes and has been on admission at the UBTH.

“He was my boyfriend and we had arguments in February. He beat me to the extent that I was not able to go to school for three days. I told him I was no longer interested in the relationship. He later tried to forcibly take my telephone, but I refused to give it to him. I told him he was not the one who bought it for me.”

“On March 23, he called and asked me to meet him in front of our house. I refused initially, but he insisted, so I came out. He asked: ‘Do you mean you don’t want me again?’ I said:  ‘No!’ I was no more interested in the relationship.  And immediately, he poured the acid on my face. Since that day, I have been on admission at the UBTH and the doctors say I might not see again except I am flown to India where my eyes could be restored. “

She noted that Cyril was the last person she expected to treat her so badly and pleaded with good spirited Nigerians to come to her aid as she has learnt what she said is ‘the biggest lesson of my life.’

“I never knew he would have the heart to pour acid on me. I made a mistake. I have learnt the biggest lesson of my life. My prayer now is that God should touch kind-hearted Nigerians to come to my aide so that I would be able to get treatment abroad, since my parents cannot afford it.”