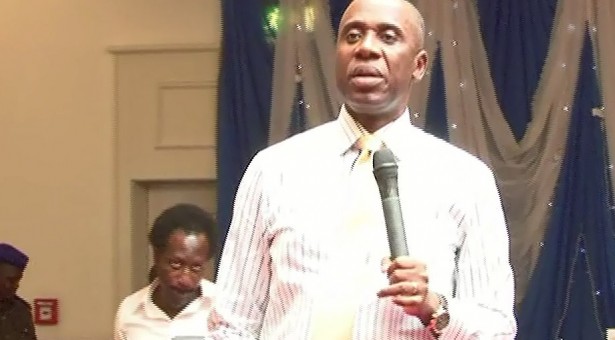 Rivers State Governor, Rotimi Amaechi has dared those plotting his removal from office saying he is satisfied with his stewardship first of all as Speaker of the State Assembly and later Governor for which he would be remembered.

Addressing an inter-party summit with the theme “Cohesive inter-party relations as a panacea for peace and sustainable development in Rivers State”, in Port Harcourt, the state capital on Tuesday, Governor Amaechi stated that any government which could not attribute its victory to the people’s votes would not be responsible to the people.

According to Amaechi, “Indeed, it is only the Peoples Democratic Party (PDP) that has the guts to suspend a governor without a reason. I leave them to God and to you (the people)…. We must come together to defend Rivers State.  It’s not about me, I have served eight years as Speaker, nearly six years as Governor.  Even if I am removed tomorrow, I am satisfied that this state, this country and history will recognize and remember me.

“If there is no history that I have made, the one God has helped me to make is the one that I stood out and fought for my right and became a governor. You voted on my behalf and the Supreme Court confirmed that when you people were voting, you were voting for me. But you also need to make your own history and that history is that let Abuja know that you can stand for your right, whether you belong to PDP or APC or any other party.

“If you listen to me yesterday (Monday) when I was addressing Rivers youths, I told them ‘all those from 18 and above should please get up’ and they got up.  I asked them to sit down, they did and I asked again, ‘all those that have voters’ card should please get up’ and a lot of them did and I said we shall punish irresponsible politicians with our cards.  So what I expect from all of you whether you belong to APC, CPC, where ever you belong to, start now to mobilize the state for one man, one vote.  We will not allow them intimidate us with police or anything. Instead, we shall intimidate them with our votes”, Amaechi said.

Keynote Speaker and Chairman of the Senate Committee on Petroleum Downstream, Senator Magnus Abe, urged politicians in the state to preserve and not destroy the state by their actions.

He lamented the lack of participatory democracy among political parties and the sole desire by parties to acquire and hold on to power for selfish interests.

Abe said, “In Nigeria, the evolution of our party politics has been less than satisfactory. I say this because our country today is deeply divided along ethnic, religious and cultural lines. The main challenge facing our country has been the development of national political parties that will promote issue and idea-based contest for power. In other words, the contest for power will be a contest of ideas. The parties in Nigeria have evolved into vehicles strictly for the acquisition and retention of political power. In this evolution, our political parties have lost one of the key attributes of participatory democracy, that leadership should be a contest not of persons but of ideas.”