Home Entertainment If It Causes You To Sin Cut It Off: Angelina Jolie To...
Facebook
Twitter
WhatsApp 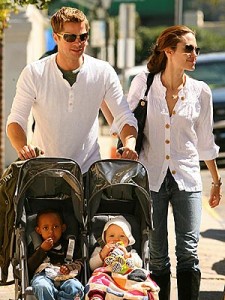 Hollywood actress Angelina Jolie who recently had a double mastectomy, says she is planning to remove her ovaries too.

Angelina Jolie’s decision to have a double mastectomy has reduced her chances of developing breast cancer from 87 per cent to under 5 per cent.

According to medical professionals, by removing her ovaries, she’d also reduce the chances of developing ovarian cancer.

The public has praised the actress who has been very public with her health decisions; inspiring millions of women around the world.

‘She could have stayed absolutely private about it and I don’t think anyone would have been none the wiser with such good results’, says Brad Pitt, Jolie’s husband.

Hmmm, hope she doesn’t wake up one day and plan on cutting off anything else oooh!!!!