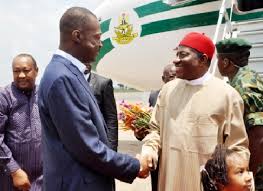 President Goodluck Jonathan’s visit to Enugu where he among other things commissioned the Enugu airport has provided political leaders of the South-East with opportunity to voice there needs to the Federal Government.

The leaders on Saturday listed the demands of the geo-political zone from the Federal Government, including the Second Niger Bridge, due attention to roads and solution to ecological problems.

Speaking while welcoming President Goodluck Jonathan during his visit, through Governor Peter Obi of Anambra State, the the Igbo leaders thanked Jonathan for fulfilling his 2011 electioneering campaign promise to the Igbo by completing Akanu Ibiam International Airport Enugu, for a region that merits its own international airport, being the most widely travelled in Nigeria for its commercial and entrepreneurial activities.

The Igbo leaders also spoke on the Second Niger Bridge, saying: “The bridge will serve as an important economic corridor that is at the heart of a globally recognized emerging industrial hub, not just for this nation, but for the entire Africa. The salient national benefits of a second bridge across River Niger cannot be overemphasized.In our last meeting, you promised to flag off this project within the First Quarter of 2013. We humbly plead that you return to our zone in the not-too-distant future to fulfil this promise for which your commitment is not in doubt.”

Also speaking on the bad state of roads, they said: “The present state of most federal roads in our zone remains deplorable and our people very often use these roads as a comparative measure of the federal government’s commitment to our zone.

“In this context, sir, we wish to once more as a people appeal for your due attention to the Enugu-Port-Harcourt, Enugu-Onitsha, and the Owerri-Elele federal roads, which we have repeatedly brought to your attention. These roads form a critical tripod in our national transportation mosaic. Similarly, a critical bridge on the hump of the federal road linking Abakaliki to Ogoja is in dire need of replacement.”

“The erosional incursions in our five states”, the Igbo leaders said, “seem to have no boundaries. Some work has been done, but much more remains to be done.”