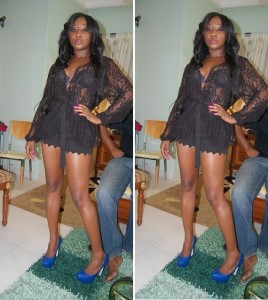 When in November 2008, sultry actress, Ini Edo got married, many expected that it would be a goodbye to spinsterhood for the actress. But about five years after marriage, Ini Edo’s case can best be described as that of a ‘married but living single’ woman.

Her husband, an America-based, but Edo State-born businessman, Philip Ehiagwina was reportedly married to Ruth, who accused Ini of snatching the handsome dude from her.

So, when news started flittering around about Ini Edo’s romance with Philip, it became a war for the actress, who tried everything possible to scare away possible intruders.

But five years gone, the couple seldom stays together for a period of straight six months, a source informed Nigeriafilms.com. As we were also informed, while Philip has stayed back in the United States of America, while Ini Edo finds solace in Nigeria, where she stays most of the time.

This has raised concerns and questions about the marriage. People have asked if everything is still well with the union. Some known actresses, who married overseas-based lovers, have since joined their spouses in their base, but such is not the case with Ini Edo and Philip.

Regina Askia, Rita Nzelu just to mention a few, have all relocated abroad to hook up with their spouses to enjoy their marriages.

Initially, many believed that Ini Edo would dump acting after marriage to join her hubby abroad, but that seems not to be the case. The actress is now being alleged of going back to her old lifestyle, when she was still single due to the ‘absence of a pillow’ to hold when the weather is cold.

One of the questions that many now ask is that ‘is Ini Edo truly a married woman?’.

Meanwhile, Philips flew into Nigeria few days ago for the burial of his mother. Ini was also there. Our source said Philip will soon travel back to his base without Ini going with him.