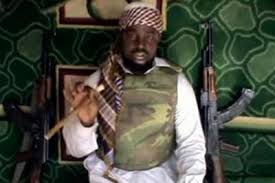 The leader of the terrorist Islamic sect, the so called Imam, Abubakar Shekau, seems to have a facebook page where he communicates and exchanges messages with his friends. In his facebook page, Shekau has denied that Boko Haram collected any ransom to free Alhaji Skettima Munguno, the octogenarian former minister of petroleum that was kidnapped by the sect last month.

Also, as the emergency rule declared in some states but harder, Shekau posted some photos of persons suspected to be his Islamic fighters.

It is rather surprising that Shekau, whose group believe that Western Education is haram, is benefiting from Social Media, by having a facebook profile  Apparently facebook is not haram in Boko Haram’s mind.

In the facebook profile, he even gave his location via google map.

The question now is, could he be out of his mind or this is a profile created by a fun  seeking teenager?

Bellow are some screen shots of his page and some of his friends.