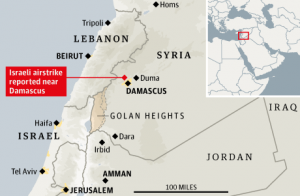 Israel has sounded a note of warning to Syria over transferring advanced weapons to Islamic militants, as it said it is considering more air strikes to make Syria stop, the New York Times reported on Thursday.

“If Syrian President (Bashar Al) Assad reacts by attacking Israel, or tries to strike Israel through his terrorist proxies,” the official said, “he will risk forfeiting his regime, for Israel will retaliate.”

The official who contacted the paper on Wednesday had declined to be identified, citing what he called the need to protect internal Israeli government deliberations.