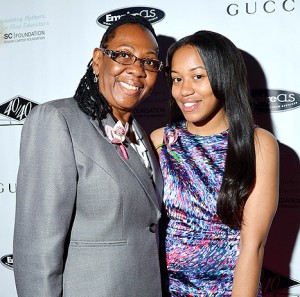 Jay-Z is one lucky man. The “Suit & Tie” rapper has a bevy of beautiful women in his life, including wife Beyonce, mom Gloria Carter, and 16-month-old daughter Blue Ivy. The proud first-time dad can hardly hide his joy when he spends time with his adorable bundle of joy, Grandma Carter told Us Weekly exclusively at a Mother’s Day event in support of her Shawn Carter Foundation on Saturday, May 11.

“It warms my heart to see how he interacts with his daughter,” she told Us. “And when she says, ‘Papa,’ he just melts. He’s a great dad.”

Mrs. Carter added that she’s fully enjoying her role as grandmother to Blue, 16 months, after having raised Jay-Z and his three siblings single-handedly while also holding down a job as an investment analyst for the city of New York.

“The amazing thing about being a grandmother is that you go get the kids, but when you’re tired, you can take them home!” she said with a laugh. (When asked if the superstar couple would want more grandchildren, Carter responded with an “I think so!”)

Her own “baby” right now is the Shawn Carter Foundation, an organization that provides scholarship money for kids who have low GPAs and wouldn’t be able to afford schooling otherwise. “When I did this, [Jay-Z] said ‘Ma, this is your baby.’ But when I need him to be here, he’s here because he believes in it too.”

As for baby Blue, who is currently learning the meaning of “hello” and “bye bye,” picking up on things doesn’t seem like it’s been an issue so far.