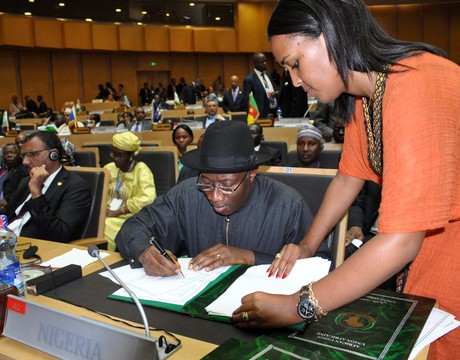 President Goodluck Jonathan, yesterday, denied media reports back home that he was missing in action when he was called upon to address a special summit of African Heads of State and Government to commemorate the 50th anniversary of the Organisation of African Unity/African Union in Addis Ababa, Ethiopia on Saturday.

Debunking such reports as mischievous as there was no truth in it, Jonathan said that he participated fully in the opening ceremony of the session until he went into a meeting in another hall with four other Presidents where they discussed on the proposed six-lane Lagos-Abidjan Expressway; which is also an important issue as far as Nigeria was concerned.

Speaking through his Special Adviser on Media and Publicity, Dr Reuben Abati, Jonathan said that before leaving the hall for the meeting, he asked the Minister of Foreign Affairs, Ambassador OlugbengaAshiru, to read his already prepared statement and the minister did just that, and added that Nigeria was not the only country whose speech was read by a minister during the session.

The presidential spokesman said, “It is perfectly normal for Presidents to meet on the sidelines of any international meeting, and as the AU plenary went on, many Presidents stepped out to hold bilateral meetings and returned to the hall.

“Where they are listed to make a statement in a plenary session and as it happened in our case, the President had gone to attend a meeting on the sidelines, the minister sitting in for the President can ask for a different slot to enable his principal return to the hall to make the statement.

“Where he does not do this, he may opt to present the country’s statement. It was not only Ambassador Gbenga Ashiru who presented the country statement on behalf of their principals. So, as you can see, there is nothing amiss here.

“President Jonathan was perfectly in order. He did not abandon his duty post. He was in fact busy at work on behalf of Nigerians. I see the mischief that has suddenly erupted around this matter as a classic case of much ado about nothing.

“President Jonathan is an accomplished diplomat; under his watch, Nigeria’s relationship with other countries has continued to grow strong. We are witnessing under this administration, a truly golden and glorious moment in Nigeria’s foreign policy process, an achievement which President Jonathan cherishes” Abati said.