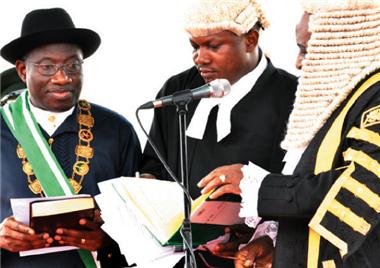 The Presidency on Wednesday declared President Goodluck Jonathan’s readiness to shelve his 2015 Presidential ambition if the Senate passed its proposal for a single non-renewable six-year tenure into law.

This latest volte-face by the Presidency is a clear indication that Jonathan is gearing up to contest the 2015 general election as well as casts huge doubts on the credibility of the President as he had shortly after his election in 2011, said he will not benefit from any tenure elongation plan.

But the President’s Special Adviser on Political Matters, Dr. Ahmed Gulak, said the ambition to stage a return would be shelved if Senators decided in favour of a single term for the President and state governors.

Gulak, who noted that the President should be given credit for being the originator of the single-term proposal said, “Nigerians will remember that it was President Jonathan that suggested an idea of a single term tenure from the beginning. So if the proposal becomes a law, the credit should go to the President.

“If it becomes a law and is enshrined in our constitution, the President and everybody will be bound by the provision of that law. Let us wait and see what happens.

“We are not seeing the move as a way of stopping President Jonathan from re-contesting in 2015. The law cannot be made because of one individual.

“When it takes effect, everybody will be bound by it.”

Information Nigeria reports that on Tuesday, the Senate Committee on the Review of the Constitution had recommended non-renewable single six year tenure for the offices of President, Vice-President, governors and their deputies.

However, the Senate panel’s recommendation disqualifies Jonathan and incumbent governors from benefitting from the new arrangement if it becomes law.