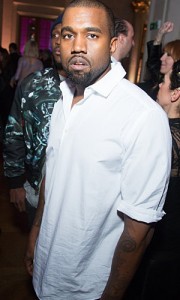 Kanye West is having a tough week. Actually, more like a blunder-filled one.

The 35-year-old made headlines last Friday when he slammed his head into a street sign with baby mama Kim Kardashian (and then got really mad at the paparazzi for causing the clunk), documented in the video now seen ’round the world.

Then on Tuesday, the father-to-be’s Lamborghini Aventador (worth a reported $750,000) was hit by a closing gate outside his baby mama Kim Kardashian’s house in Beverly Hills. But this time West (who owns a whole collection of fancy cars) really can blame someone else: The guy who was behind the wheel of the car – reportedly returning it from a service appointment – took a few seconds too long to drive it through the electric gate after it opened, and it ended up shutting right on the pricey set of wheels. Yikes!

As for the damage, it’s unclear how extensive it is, but we’re sure Kim and Kanye can just request a few thousand extra when they sell those first baby pics and that should cover it …

The day before, Kim K. apparently ran into a bit of trouble herself on the road, tweeting on Monday: “A paparazzi almost crashed into my car today! I am still shaking! He put me in such danger! When will this legalized stalking stop???!!!???” 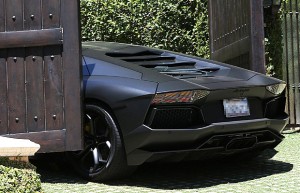