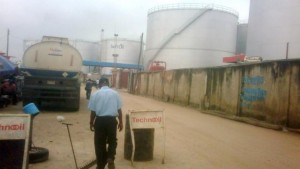 Residents of Kirikiri town, Oriade Local Council Development Council Area, LCDA, of Lagos State have paralysed operations of five oil firms in the community as they protest the bad state of roads in the community and lack of employment opportunities for its youths.

The community accused the oil firms of refusing to offer jobs to the youths, and also destroying the two major roads in the community-Cardoso and Karimu-by their heavy duty trucks.

The protesters who displayed several placards with inscriptions such as “repair our roads and provide jobs for our youths”, blamed the deplorable state of the major roads in the town on oil companies and vowed to halt their operations by preventing tanker trucks from entering into the community until their demands were met.

President-General of Kirikiri Youth Association, Mr. Udoji Popoola, explained that the protest remained the only option since the companies had reneged on their promises to repair the roads.

“We are not fighting anybody. We are not destroying anything. All we are agitating for is that the roads in this community are in a very bad condition and that it is high time they were repaired,” Popoola said.