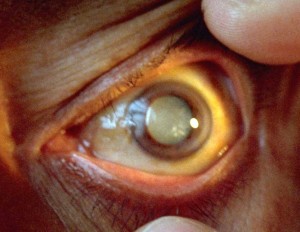 A 5-day free eye screening and surgery programme organised by Chevron Nigeria Limited, Eye Foundation Centre and a Lagos State lawmaker representing Epe constituency 1, Honourable Abiodun Tobun, has revealed that majority of those having different eye defects are those within the age bracket 40 and above with high cases of cataract.

Speaking at the centre, a medical practitioner, Dr. Tayo Bogunjoko, who was at the centre, told Vanguard that the most prevailing eye problem is cataract as well as refractive errors while a few glaucoma problem is also on record.

“There is hope for people suffering from cataract if the problem is reported on time. It involves the use of surgery on the patient provided there is no more pathology at the back of the eye,” Bogunjoko said.

A resident, Mrs Adenola Taiwo, 46, said she could no longer see or read perfectly.

“When I came to the programme, I was told I had refractive error but after underwent screening, I was given eye glasses.”

Omotolani Ogunbanwo, 25, said, “I have been experiencing itching and swallowing eyes for a while and I have not been able to do anything to it. I used to have worms on my eyelids. But, with this programme, I know that there will be solution to the problem”.

Meanwhile, Mr. Deji Haastrup, General Manager, Policy Government and Public Affairs, Chevron Nigeria Limited, said the involvement of Chevron in health issues was because health problems are on the increase.

Haastrup who was represented by Mr. Esimaje Brinkinn, Chevron Advisor, Social Performance, disclosed that investing in health is key to the development of the company.

Also speaking President, Eye Foundation Centre, Dr. Adekunle Hassan, stated that “the partnership is part of the corporate social responsibility of the organisation.