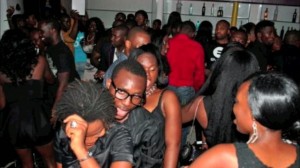 Lagos state government has said that over N1 billion was spent monthly by residents on merriment and entertainment in the state.

Speaking, yesterday, at the 2013 ministerial Press Briefing held in Alausa, Ikeja, to commemorate the sixth year anniversary of Governor Babatunde Fashola’s administration, Commissioner for Local Government and Chieftaincy Affairs, Mr. Ademorin Kuye, said the statistics was a product of a recent research conducted by the State’s Ministry of Economic Planning and Budgeting, stating that “this justified the reason why local Governments demand that anyone organising events in the state must pay the Merriment Tax.”

“There is merriment tax in that constitution, its part of the rate Local Governments can collect. We have not fully utilised the benefit of the entertainment industry in this state”.

“Over N1billion is spent monthly in Lagos state on entertainment and parties, we have the records to confirm this and this people, how many of them pay tax? The money goes into drinks, wine, food, aso-ebi and all of that and when they spend all of this money; they do not want to pay anything to the government,” Kuye said.

He lamented that the benefits of entertainment have not been fully tapped and utilised in the state and the country, stressing that taxes accruing to the government are spent on merriment.