A 23-year-old Lebanese, who was arrested for kidnapping his 61-year-old aunty, told journalists on Thursday that he committed the crime to punish her. 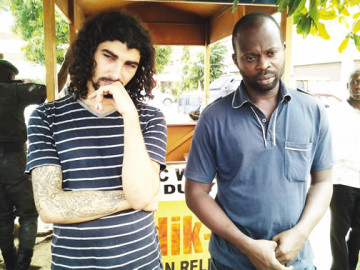 The suspect, Mohammed Dannawi, said he kidnapped the victim, Alhaja Essa Dannawi, not because of money but because she offended him and his wife.

He said he carried out the evil act with a former employee of his aunt, Obi Kwentua, to whom he gave the spare key to her house.

He said, “My aunty did something very bad to my wife and I and so I decided to punish her. I met with Obi (Kwentua) and told him that I wanted my aunty kidnapped. I gave him the spare key to her house and he in turn hired some boys to do the work.

“On the day of the operation, I left the house and five guys stormed the place and took my aunty away. The plan was not to demand money from her, it was just punishment.”

It was learnt that the kidnappers, however, demanded N100m ransom but later agreed to collect N4m. It was while attempting to collect the ransom that one of the suspects was arrested.

She said Mohammed confessed and through his cooperation, his aunty was rescued.

She said, “On May 2, 2013, at about 3:15am, a Lebanese woman, Essa Dannawi, who is 61 years old, was kidnapped at her residence at 40, Abule Nla Road, Ebute Meta and the case was transferred to the Special Anti-Robbery Squad. The officer in charge, Abba Kyari, had an extensive interview with members of her family and her nephew (Mohammed) was arrested on May 9.

“Upon interrogation, he confessed to organising the kidnap because his aunt offended him. SARS operatives used him to arrest his accomplice (Kwentua) at Rita Lori Hotel, Surulere, where he came to collect N4m from the relatives of the victim. She (Essa) was later released at Oyingbo area.”

It was learnt that the other suspects were still at large.