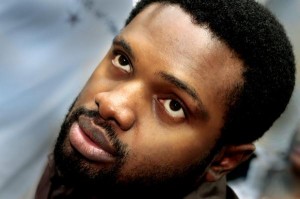 I’m a dreamer, and I don’t mean that in the literal sense or in the literal context of going to sleep and dreaming even though that’s very nice because that’s when I get to drive and play golf.

But a picture of an average guy who lies down and faces the ceiling and just dreams away. Fortunately for me, a lot of things I have dreamt about in my life have come true. I believe strongly that one of the strong elements that fuel my very strong sense of imagination and my ability to dream is the gift of blindness. And I’m going to share with you, a couple of things that I have leant and a couple of life lessons that could be invaluable to you as well that I have learnt from Blindness.

So to start with, I will state the obvious fact that I was born blind. No one else in my family of six children is blind. There’s no known cause. No links. No explanation. Just the reality that I cannot see with my eyes.

In my neighborhood there were always something  to look forward to. My mornings were characterized by news of whose pumping machine had been stolen by morning or squabbles between neighbours over who had eaten their chicken. Actually some people try to resolve the chicken situation by tying to attach a piece of red things on their chicken legs. I don’t know how well it works…

Now, blindness does not have any physical, psychological or social meaning.  Since I’ve never experienced sight, I wasn’t aware that I was without sight. And so, I indulged in the innocence of young boyhood. I ran downstairs, jumped over gutters, played hard. Fought even harder. And got into any imaginable trouble that a Skinny young child could get into.

On a number of Occasions, I ran into walls. Ran into people. Ran into furniture’s so hard that that observers will shake their head and say in Pidgin English:

Of course my response to such a rebuke was to scurry off and catch up with my friends and hide whatever stray bruises I had sustained away from my mother’s disapproving eyes.

Initially, scoffed at other people’s well meaning concern and pity, because I do not understand what the force was all about. As I grew older and I gained more understanding of the intricacies of living as a sightless person in a world designed for sighted people, I was faced with the looming possibility of failure in my life. But what I actually considered to be much worse was people were ready to excuse my failure because of my disability.  Which brings me to my first lesson.

Do not Excuse Failure, for any reason on any account

Now, I don’t mean we should be unmerciful and impatient towards those who are either less-able or weak or disadvantaged because I believe that we should share one another’s burden, because we’ll all face low points in our lives.  What I’m saying is this. That failure will come. But the same way that it comes that we should see to it that goes. Instead, what I’ve observed is that whenever there’s a larger than life seemingly insurmountable flaw,  in a system, in our cities, in our leaders, even in our own character, we tend to excuse the failure. We overlook it. We pardon it. We indulge it. And become even comfortable with it. Sometimes, we even find different terms for the failure. In my country, we sometimes call it the Nigerian Factor. So, if something isn’t working the way it should, we shake our heads, and we automatically blame it on the Nigeria Factor. And then we move on with our lives.

But see by excusing failure, and blaming it on some systematic flaw, we miss the opportunity to scale through those seemingly insurmountable obstacles. To elevate ourselves and elevate others.

When I turned 10, I was enrolled in a Primary Boarding School for the Blind, fast forward to graduation day, teachers and other well wishers were giving us advise on going into the outside world. We were forwarned that we would come across people who be genuinely mean to us. People will snatch away our guide canes, pull out our typewriter ribbons, not give us the correct change, and generally just take advantage of us because we are blind.

And from my experience, and I’m sure most of you must have discovered, not all public opinion is correct opinion.

So, I personally decided that I didn’t want to want to worry myself about Guide Cane Snatchers, Ribbon Type writer thieves, and the likes. I decided not to take that advice. I don’t know if it was conscious, but decided to just trust. I figured that there was so many unfortunate things in life that has happened to you regardless of whether or not you were blind. So, why should I heap on an extra burden of worry on myself  just because I’m blind.

2. This is my second lesson, and it’s a tough one, to Trust.

I have learnt this from blindness to trust. Sometimes, even when I have no reason to. And as you can imagine I have learnt this lesson over and over again. now, as a child I was quite a Kid to have fun with and play little pranks on. My older brother taught me how to jump over open street gutters so anytime I was walking with friends and they inform me that we were approaching a gutter, I would jump – No questions asked. Pretty soon, I discovered that my friends were telling me to jump even when there were no gutters.  Just so they could have a laugh. But even after I found out, I still continued to jump. I chose to trust them because quite honestly, staying out of the smelly sewage gutters was very very important to me.

Now some people might ask. Can’t a person be too trusting? But I think trust has no expiration date. Blindness has taught me to keep trusting. To keep hoping. To keep believing. And by the way in case you haven’t heard, technology came along, thankfully. And not only did it take the rhythms from the typewriter, it also took away the typewriters themselves and replaced them with computers and screen readers.

And as for my guide cane story, I’ve yet to meet one friend of mine whose had their white canes snatched from them.

As a matter of fact, at some point I got too desperate and  I went ahead in my first year in the University to buy myself a Mercedes Benz Wagon. It broke down on the first day I bought it. And I remember my friend, we were trying to change the tire, and anyone who called me I will say, you know what, I’m having a little car trouble. And thankfully, we can afford better cars and I have a faithful driver, and he’s under the watchful eyes of my wife. So no guide cane ‘stealers’ and all of that.

3. Be blind to be focused

So speaking of my wife. My wife sometimes go shopping together. Now note, I stressed the word, sometimes. Because while most men would share my sentiments towards shopping. I really feel the same way for a different set of reasons. Because shopping, as a female sport, and I do believe it is, it is about feasting your eyes on goods and things of assort. So you can generally imagine how quickly I will lose interest.

Now some time ago, my wife and I, we walked into a duty free shop at an Airport. We wanted to buy a bottle of water. Before I knew it, she had stopped by to browse through a magazine, had picked up a book… seemingly normal actions for her but I found it quite alarming.

Now, here we were. We went in to buy an item but ended up browsing for other stuffs. And that was when it hit me. Sight, sometimes, is a distraction. Now, I have to say that when my wife goes shopping, no matter how good her intentions are to purchase only the items on her list, she somehow manages to come home with extras.

Good Deals! She will like to call them.  She knows a lot about good deals, and sales and half sales.  And I have to say my wife is a fantastic wonderful woman.

Now don’t get me wrong, sight is a precious gift. But on your way to your destination, what you see, can also be a big distraction from your goal. So, I have learnt that you have to be blind in order to be focused. Focus is blindness in a sense. Im sure you can relate to this because you have been focused on your goal and attained your successes by being blind to several things in your life.

Now, we live in a culture that esteems sight over blindness. And associates blindness with weakness. Yet, blindness in all of its weakness, I have drawn some key strength in my life’s journey.

When I love the veil of childhood innocence, the brutal reality of blindness stared me in the face. Self pity, and failure loomed over my shoulder. Some, I’m sure would have excused me if I became a failure. But I found it more fulfilling to break away from the expectations of mediocrity. To successfully navigate and negotiate my way through life. Even if it ruffled the feather of those who genuinely cared about me.