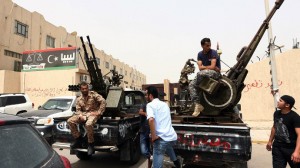 Armed groups remain outside justice and foreign ministries in Tripoli, Libya, some demanding the government’s resignation, despite the adoption of a law to purge Gaddafi-era officials from their posts.

Different groups remained outside the justice and foreign ministries on Monday, however, they failed to reach a shared position on their new demands or their reasons for pressing the siege.

“We are determined to continue our movement until the departure of [Prime Minister] Ali Zeidan,” said Osama Kaabar, a leader of one group who had promised to lift their siege if the law was passed, a law that would see Zeidan lose his post.

The General National Congress, under pressure from the gunmen, on Sunday passed the controversial law to exclude former Gaddafi regime officials from public posts in a move that could see the premier removed from office.

“The adoption of the law on political exclusion is a major step in the right direction. But we will take our time to examine certain aspects of the law,” said Kaabar who is also a vice president of the Superior Council of Libyan Revolutionaries.

“On the other hand we are determined to bring down the government of Ali Zeidan,” he said.

Zeidan’s government launched a campaign a few weeks ago to remove former rebel fighters from the capital Tripoli.

But at the justice ministry, some of the gunmen said that they were dismantling their camps.

“We are waiting for someone from the ministry to come to hand the building over to them,” Dhirar Baraou, a group member, said.

Another leader told the AFP news agency that the protesters were “divided” over the demands, and that some were content with the adoption of the law.

Under the law passed on Sunday, all those who held key posts from September 1, 1969 when Gaddafi took power, until the fall of his regime in October 2011 will be excluded from government. The ban will remain in force for 10 years, according to the text.

The gunmen, many former rebels who helped topple Gaddafi, had encircled the foreign ministry for a week and the justice ministry since Tuesday to pressure the national assembly to pass the law.