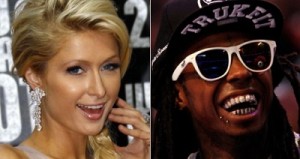 Lil Wayne confirmed yesterday that he has signed the 32-year-old heiress to his label, Young Money Entertainment. Paris will release new music this summer under the label.

Paris has been rolling with the Cash Money crew for a while now. She released a song with Wayne in December 2012 titled “Last Night,” and also appeared in the Rich Gang’s video for “Tapout,” alongside Cash Money all-stars Lil Wayne, Birdman, Mack Maine and Nicki Minaj