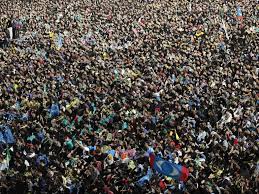 Thousands of Malaysians, dressed in black, have gathered to denounce the country’s elections which they claim were marred by fraud by the coalition that has ruled for
56 years.

Malaysia’s opposition leader, Anwar Ibrahim, is leading demonstrations against alleged electoral fraud in Sunday’s election, and has called for support from people for the opposition party Pakatan Rakyat, or People’s Pact, after he lost the race to become prime minister.

The gathering of at least 50,000 people according to AP news agency was being held in a stadium outside Kuala Lumpur, with protesters spilling out of the stands and onto the football field in the capital city.

Ibrahim addressed the crowd, thanking them for their support, and for “showing the courage and conviction to change the course of history” in Malaysia.

“This is the beginning of a battle between the people and an illegitimate, corrupt and arrogant government,” Anwar told the cheering audience.

“I think they should redo the election,” said university student Tan Han Hui. “I’m here to support democracy. I feel the election is so unfair and there are so many dirty tricks.”

“We note concerns regarding reported irregularities in the conduct of the election, and believe it is important that Malaysian authorities address concerns that have been raised,” said Jay Carney, the White House spokesman.

“We look forward to the outcome of their investigations.”

Anwar has called for a “fierce” campaign for electoral reform and said the opposition would soon produce evidence backing its claims that Prime Minister Najib Razak’s government committed fraud.

Najib was sworn in on Monday as he maintained his election was free and fair, but a joint report released on Wednesday by two independent election watchdogs disputed that claim, saying the elections were marred by bias and irregularities that added up to “serious flaws” in the electoral system.

The report by the Institute for Democracy and Economic Affairs (IDEAS) and the Centre for Public Policy Studies (CPPS) cited continued questions over the integrity of the electoral roll.

The election was “only partially free and not fair,” it said.