A man was arrested after he washed his girlfriend’s mouth with soap because she was cursing too much, according to reports. 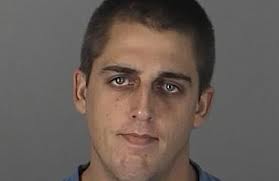 John Vincent Caruso was arrested and charged with domestic violence.

Caruso, 26, and 20-year-old Stephanie Madewell were fighting on Tuesday at their home in Hudson, Florida, according to an arrest report obtained by a crime website.

Madewell kept cursing, so Caruso did what mothers have threatened to do to their cursing children for decades. He came up behind Madewell as she sat on the couch and put a bottle of liquid soap in her mouth and squeezed the bottle, according to police.

Madewell told officers that some soap dripped down her throat and the bottle cut her lip when she tried to hit it out of the hand of Caruso.

Caruso admitted to doing so, and was arrested on charges of domestic battery. He told an officer that his parents used to wash his mouth out with soap, adding that “I still put soap in my mouth now, out of respect for my parents.”

The arrest report said Caruso was Madewell’s boyfriend for five years, making him 21 and she 15 when they started dating. They have two children together.