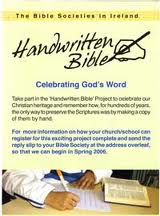 In front of a small crowd at a church in New York, a man named Phillip Patterson completed his handwritten King James Bible after working on it for seven years.

An event was held Saturday at St. Peter’s Presbyterian Church in Spencertown to mark the completion of Patterson’s Bible, the Register-Star, Hudson, N.Y., reported.

Patterson, who said he was encouraged to hand-write the Bible by his late partner, Mohammed, a Muslim, wrote the final words in front of the gathering.

Patterson said he did learn some things from the process: “You have to think for yourself.”

Despite suffering from the effects of AIDS, Patterson said he never doubted he would complete the Bible.

“It’s almost as something in the universe spoke to me in its own language,” he said, adding that he was “in the zone” while writing the book.

Now that the Bible is finished, Patterson says he plans to continue his life in the community.

“I will still be loving my community, my family. That won’t stop,” he said.