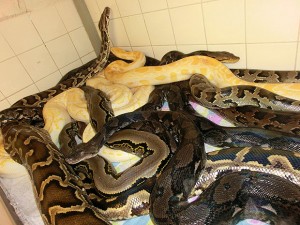 COPS looking for a missing man were shocked to find him dead in his home — surrounded by over FORTY giant snakes.

Many of the reptiles, including a 30ft anaconda and four 35ft pythons, were slithering free around the decomposing body when police entered snake fan Heiko Rieder’s apartment in Straubing, Germany.

A fire service spokesman said: “At least one was as thick as a human thigh.”

Worried colleagues alerted police after the 40-year-old caretaker failed to turn up to work for a week.

It is thought he died from a heart attack while feeding his pets.

Experts believe he was only saved from being eaten as he was too WIDE to be swallowed whole.

Reptile centre boss Markus Baur, now caring for the snakes, said: “They probably didn’t eat him for two reasons. One, they prefer their prey alive to start with.

“And two, they like to eat their prey whole and the average European adult is just too long and wide for that.”

In total, 46 snakes, some in tanks, were recovered from the property.

A police spokesman said: “His body decomposed rapidly because of the heat coming from the snakes’ terrariums. There don’t appear to be any suspicious circumstances.”