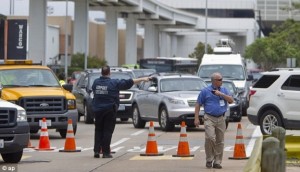 A gunman walked into Bush Intercontinental Airport with an AR-15 Thursday afternoon and fired at least two shots before shooting himself. It happened in the ticket area inside Terminal B around 1:35 p.m.

A Homeland Security special agent heard the gunfire and confronted the suspect. He fired at the suspect at the same time the man shot himself in the head, according to HPD. “We just saw the dude walking in, and he was already suicidal because he put the gun to his head,” Carrizales said.

The suspect was taken away in an ambulance, but he didn’t survive.
No one else was injured. But passengers and employees were shaken by the shooting.”It was traumatic it really was, it was too much going on. Everybody was running, and all that stuff, it was a lot going on,” Carrizales said.

Dale Howard, who was at the airport to pick up his sister for a family funeral, was on the lower level when the chaos erupted. “Right off the bat, there were two shots, about an eight to 10-second delay, two more shots, a short delay, then a fifth shot,” he said. After that, people were running in panic.

“There was a bunch of screaming, a bunch of people running, people coming down the escalator the wrong way getting away from it, leaving their bags on the thing,” Howard said.

The identity of the suspect hasn’t been released, but police say he was a 29-year-old Houston-area resident. He had been staying in a hotel the last few days. They found a suicide note on his body.

Terminal B was closed for more than three hours while police investigated the shooting scene. They found one bullet in the ceiling.
Bomb-sniffing dogs swept the terminal as a precaution. The FBI is assisting with the investigation.