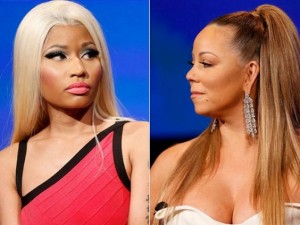 American singer and wife to comedian Nick Cannon, Mariah Carey is reportedly tired of the whole feud with fellow American Idols judge Nicki Minaj, and is threatening to quit the show.

According to a reliable source close to “American Idol,” Carey is so done with her fellow judge’s threats and nastiness she last week threatened not to come to the show this week, despite the show being down to its top three finalists.

The source said “Mariah doesn’t want to come back, Nicki is really disrespecting her and she’s tired of trying to bite her tongue all the time,”  Fox New: “One night Nicki tried to be kind of nice, but Mariah didn’t bite, so I guess she figured screw that.”


The words and insults have moved form the set to social media, with the female rapper referring to her older fellow judge as “insecure” and “bitter”.

And even if Nicki Minaj doesn’t come back for the next season, Mariah Carey is still not likely to feature on the talent show.

“She’s done with it all. She doesn’t need the platform, and all the drama isn’t healthy for her,” added the source. “She’s also under fire with the producers for not being critical enough of the contestants.” (FOX News)