Home National News Odd News Meet Ai Hasegawa, the Woman Who Wants to Give Birth to a...
Facebook
Twitter
WhatsApp 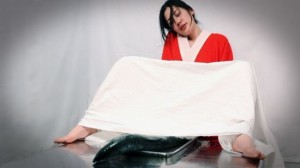 With a population nearing nine billion people and food shortages becoming increasingly problematic, the human race needs sustainable solutions if it wants to survive. Japanese designer Ai Hasegawa has come up with a very controversial approach to solving environmental and food-related issues – the possibility of women giving birth to various animal species and eventually eating them.

In one of her most intriguing projects yet, “I Wanna Deliver a Shark…”, Ai Hasegawa tackles “the problem of human reproduction in an age of over-population and environmental crisis.” She envisions the possibility of humans one day giving birth to their food and satisfying both their nutritional needs and that of giving life. The 33-year-old says having a human baby isn’t as simple as some people think, especially with our world about to face a major food crisis. She argues that bringing new humans into this world is definitely not the answer, but giving birth to endangered animal species might be just what we need to survive. “We are genetically predisposed to raise children as a way of passing on our genes to the next generation but we live in an age where the struggle to raise a child in decent conditions is becoming harder with gross over-population and difficult environmental conditions,” Hasegawa says. “We must also eat, and we are equally facing growing food shortages as a result of over-fishing, land use and a growing population. By giving birth to an edible animal it might place more value on that endangered species and help prevent it’s extinction.”

Intrigued by the Japanese designer’s bizarre idea, VICE.com contacted Ai Hasegawa to learn if she thinks giving birth to an animal is even possible. “It will be, in the near future,” she said. A human uterus is just the right size to hold one fetus. I’ve been speaking to a gynecologist about ways of making it bigger. I believe humans could use their uterus as an aquarium or incubator.” Talking about possible compatibility issues between the human placenta and a shark’s, for example, Ai said the placenta comes from the fetus, so there’s no need to modify the human DNA. The real problem is that a woman wanting to carry an animal fetus in her uterus would have to stop  menstruation, and the medicine for that has very unpleasant side-effects. Hasegawa thinks the idea candidate for this unusual experiment would be a “rich, single, and above all, menopausal woman”. Asked why she chose a shark for her project, the designer said that research shows they would be the most compatible, plus they fit all her criteria: “they’re endangered, their life-span is almost as long as that of a human, and most importantly, they’re delicious.”

Some people might think Ai’s idea is preposterous, but she has thought it through. She even came up with a bonding system which works “ by sharing the mother’s stress with the shark embryo. When the mother feels stress, a device measures a galvanic skin response and heart pulse rate, translated as a “stress signal”, that triggers the low voltage electrical signal that mimics the emergence of a predator in the sea for the shark embryo. Giving such stress works as a training device for when they are returned to the sea after delivery.” Yes, the sharks would be returned to sea for some time, in order for them to taste like the wild sharks used in Japanese cuisine. Hasegawa says she loves a good piece of shark, but she always feels guilty for eating an endangered species. This way the problem is solved, plus “it’s also less costly than raising a human, and there are fewer responsibilities”.